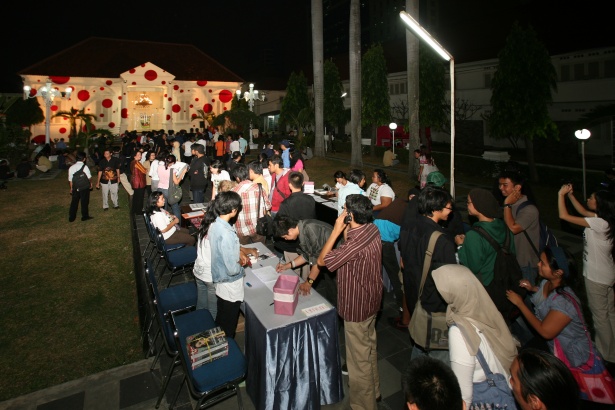 In Indonesia, video art was not the result of an artistic movement or a particular development in contemporary arts, such as it was the case in USA and Europe with the Fluxus movement and its recorded performances, or Nam June Paik's videos reflecting on television and media culture. In fact, the influence of video in contemporary art is not only the result of an innovation within the artistic field, it is rather a critical positioning towards entertainment industry and, above all, a critique of television.

Video art in Indonesia developed in a particular social context in the early nineties and was first used as part of installations, such as Heri Dono's Hoping to hear from you soon (1992), presented at the First Asia Pacific Triennale in Brisbane in 1993, or Krisna Murti's 12 Hours in the Life of Agung Rai, the Dancer (1993) - the latter  has been committed to video and media arts practice throughout his artistic career. Video was included in installation works composed by different media, such as painting, found objects or sculptures, and some of these included the audience to take active part in the artworks.

Video has supported different social movements spreading critical voices and documenting social transformation, in particular the downfall of Suharto's 32 years of authoritarian government (1967-1998). During this period, video-related practices were controlled, introducing new taxes on sales and screenings of video cassettes, censored or classified in order to prevent piracy. In the late nineties and specially in 1998, the year of the resignation of Suharto, audio visual media was related to politics and was used to empower marginalised communities. The first person storytelling introduced a new mode to understand audio visual media as a means for social changes.

In an interview I had with the artist Kuswidananto a.k.a Jompet, he said: "Community is in our DNA". In fact, Indonesia has a long tradition of communal practice, exemplified by the sanggar, in which pupils gathered in places to learn from a master. In sanggars, people could learn a variety of disciplines, including dance, music, martial arts, painting, sculpture, batik print, amongst others. In some cases, students and masters used to live together as a sort of extended family. Due to the lack of infrastructure in the arts field in Indonesia, artists become not only producers, but also arts and gallery managers, offering spaces for the discussion and display of art. As a result of this, artist-run spaces are organised by communities that share common interests. These initiatives generally reinforce networks of collaboration, offering gathering places to get the latest news about the local and international art scene.

According to Videochronic: Video Activism and Video Distribution in Indonesia, published by KUNCI Cultural Studies Center and Engage Media in 2009, video activism can be divided in three groups: 1. Grass roots video activism: dedicated mostly to self-empowerment of communities or individuals, developing critical responses against mainstream and commercial media, such as Kampung Halaman (Yogyakarta) that promotes the use of video with young people, coming mostly from rural areas; 2. Social/tactical video activism: their activity is focused on topics such as environmental damages, human rights abuses, gender inequalities, class conflicts or political protests, for instance Gekko Studio (Jakarta), an initiative involved in environmental issues and the preservation of traditional culture; 3. Experimental video activism: critical positioning against the hegemony of mainstream media with strong creative components and innovative approaches to video.

Experimental video activists want to go beyond the boundaries between media, arts and society. Thus, many of them are just 'seasonal video makers' that only pop up for festivals, although the Indonesian art market has started to show some interest in video art in the last years. Until now, there is a blurred area between artistic exploration and activism, and in many of these initiatives the roles of artist and activist are indistinguishable. In general, these groups want to make general audiences aware of the use of video and other modes of cultural representations. The challenge is the Indonesian established television media, largely composed by reality TV or celebrity shows and sinema elektronik or sinetron (the Indonesian version of a soap opera).

ruangrupa, a Jakarta-based artist-run space, understood its work since the beginning as a reflection on urban culture and the impact of media culture in society. The group links video art practice to visual art discourse and urban research. They established the first international video art festival in Indonesia, OK. Video–Jakarta International Video Festival in 2003, a biannual event held in Indonesia's capital city. Motivated by the growing use of audiovisual media and the new technologies in everyday life, this initiative considered important to establish a dialogue with the audience and analyse the audiovisual phenomenon. Since its beginning, the festival seeks to give notice of video in a creative sense and to introduce the video medium to a general audience. They usually do workshops with different communities all around the archipelago and include the resulting video works as part of the festival.

Compared to ruangrupa, Jatiwangi Art Factory focuses on rural life connecting arts and cultural activities, including radio broadcast and education. They set up the Village Video Festival and work with local villagers. Another initiative dedicated to experimental video is Forum Lenteng, which involves experimental video technologies with socio-political issues and is engaged in community-based projects. One of this is 9808, a review and reflection from Indonesian video makers about ten years after Reformasi1 .

Amongst these experimental video activists, a number of artists use video not only for critical purposes,  but also for creative means. For instance, Videolab, a space for discussion and screenings of video and media art, or Common Room, an open platform for art, culture and new media, both based in Bandung. Video Battle was a series of compilations of videos organised and selected by two members of the former photographer's collective MES56, in Yogyakarta. At the moment, these compilations can be found online.

Another example is the House of Natural Fiber (HONF), a new media laboratory in Yogyakarta focused on topics such as environment and sustainability, connecting the fields of new media with biology. One of its latest works is  Intelligent Bacteria – Saccharomyces cerevisiae, in which a fermentation process produces alcohol. The project, presented during the Transmediale Festival in 2011, won the Transmediale Award. This initiative is in charge of the Yogyakarta International Videowork Festival.

The screenings of videos are usually outside the mainstream platform in independent cinema houses or foreign cultural centres, but also in galleries, political centres, village halls or in friends' houses. Some initiatives and individual artists send their works to festivals and exhibitions overseas. For this, I want to highlight the significance of mediation of information amongst communities, in which online and offline networking truly helps to spread the word. Indonesia is currently the fourth largest Facebook market in the world, with almost 50 million users, after USA, Brazil and India. And, you may think about what this means: communities continue or might even start online.

Video practices in Indonesia started from the observation and critical approach on social and political subject matters. It was in this socio-political context that video art originated and it has been at the margins between art and activism since its beginning. In this context, communities play a key role in the distribution, production and consumption, promoting a network of collaboration and sharing of information. The need of information often leads to piracy as a mode of knowledge production. These multitasking communities that not only create, produce, deliver and offer spaces for discussion on audiovisual media, are like pirates in a media landscape full of treasures.


1               Reformasi (Reformation), also known as the Post-Suharto era, is the term used for the period of transition to a democratic government in Indonesia after May 1998.

*              This paper is an edited and updated version of the lecture "Video Art and Video Initiatives in Indonesia"  held at ZKM - Center for Art and Media Karlsruhe during the programme "Curating in Asia" of the exhibition The Global Contemporary - Art Worlds After 1989 in December 2011.

Katerina Valdivia Bruch is a Berlin-based independent curator. She has curated exhibitions for a number of institutions, including ZKM-Center for Art and Media Karlsruhe, Bielefelder Kunstverein (Bielefeld), CCCB (Barcelona), Instituto Cervantes (Berlin and Munich), Instituto Cultural de Leon (Mexico), Para/Site Art Space (Hong Kong), and the Institute of Contemporary Arts Singapore, LASALLE College of the Arts. In 2008, she was co-curator of the Prague Triennale at the National Gallery in Prague. Besides her work as a curator, she contributes with essays and articles for art publications and magazines. Since 2009, she has organised a number of talks and exhibitions on Indonesian contemporary art.