Ricardo Guimenez. ultimate feature film “The VENICE FABLE” (temporary title) will enter in the post production stage. This is the last shooting day on the banks of the Italian city canals. The film director is watching the main actors who embark on an old "vaporetto". The camera follows them inside of the boat. The last sequence is a close-up on the actors. The Renaissance architecture seems to flow around them in - a one-minute long travelling.

Special effects will be added on the sequence that shall slowly fade to the white. The actor's face will remain in high contrast and their contours will look like brush strokes. The final credits will then appear one by one in a vertical movement. The music soundtrack shall evoke a race on the waves on the tempo of bandoneons as played by Astor Piazzola.

The vaporetto is far away now. On the bank the crew is packing the equipment. The lenses and, tripods will not be used in this background before long time. In two days, the team will fly back to Cebu, the Philippines. The team includes film students, some of them still have to pass examination next month (More about film schools in the Philippines Resources Directory).

The shooting went on pretty well. Ricardo Guimenez will finally enjoy a little break before the start of the editing stage. Let us dream a little while with him. It is still”a great Venetian intermezzo”. Ricardo Guimenez often quoted Federico Fellini comments on the Mostra. "The Venice Film Festival, is like passing a final exam." My question was thus about the preparation to this final exam. And what is next with the movie?

The producer hopes to present the film in Cebu first and, here at the next “MOSTRA” for the world premiere.

R.G: The film is about Carlos Gambatesa an artist from Cebu. He comes to Venice to find his origin. Long ago the Gambatesa have been an important branch of the Lombardo family. Carlos will recognized his father face in one of the painting of the Basilica San Marco. We have been filming some sequences in art galleries and churches, where XVI centuries paining were hanging. We still have to obtain the agreements for using some of these images in the film backgrounds. The precondition for the participation of a film at the Mostra is to own all the rights on the film. This is not totally the case at the moment. Just think that the owner of a master piece of Giovanni Battista Tiepolo may refuse to have his painting in the film. It will be a serious problem for the production. We hope to be helped by a local film commission to get them on time. (To get the permission before a shooting in Venice - read more in the Italy Resource Directory FRIULI VENEZIA GIULIA FILM COMMISSION)

GGG : Is “Venezia 62”the target section?
R.C : Yes, I would like to see the film competing for the Golden Lion. This is the prize awarded by the international jury for the best feature film. As you see, I am a young filmmaker. I have made two short films before. This film is my first feature film. I am thus also eligible for the "Luigi De Laurentiis" Award. The festival has several awards beside of these attributed by the different categories. FILMAURO for example will donate 100.000 euro to be divided equally between director and producer. The film director may also receive 20.000 meters of film offered by Kodak! This year, the other section awards are: the Corto Cortissimo Lion for best short film (with a runtime not exceeding 30 minutes). The Venezia Orizzonti Prize, and the Venezia Digital. The SIC (the "International Critics' Week) also has its own jury and awards.   Actually I have not decided if the final result will be blow up or not. I may only propose to compete in the "Venezia 62" if the final version will be in 35mm. But till now all was filmed in 16mm. If we decide to present the film in 16mm, it will have to be in the "New Territories" section. This is the only section presenting films in 16mm, VHS, DVD or Betacam in Pal system.

GGG: How about the film language?


R.C : There film has two languages Cebuano and English. Some dialogs are also in Italian. I will have to be subtitled the movie in Italian and have the Italian dialogs in English and Cebuano. I shall also provide the festival with a "dialog list". The list (which is necessary for the interpreters and also for the electronic subtitling) should contain all the dialog and comments in the soundtrack of the film in chronological order.

GGG : What is the promotion foreseen for the movie?
R.C : I am counting first of all with the 3.000 journalists, film critics, and television reporters who are attending the Mostra. The selected movies for the festival can attract a great international attention. The event has long been an exclusive launching pad for the work of new filmmakers. There is another promotional option during the festival. The "Venice Screenings" work as a film market and brings international buyers and sellers. Compared to other markets, the "Venice Screenings" are essentially aimed at independent productions and the art house markets. My last movie “The VENICE FABLE” enters also in that category.

The story, the name of the film director and the title of the film are fiction. According to the festival regulation, the invitation of a film must remain confidential until announcement by the Festival, or suffer exclusion from the selection. 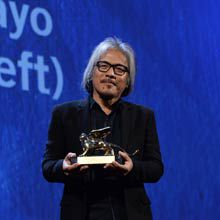 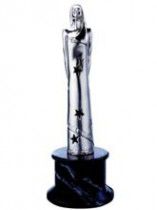