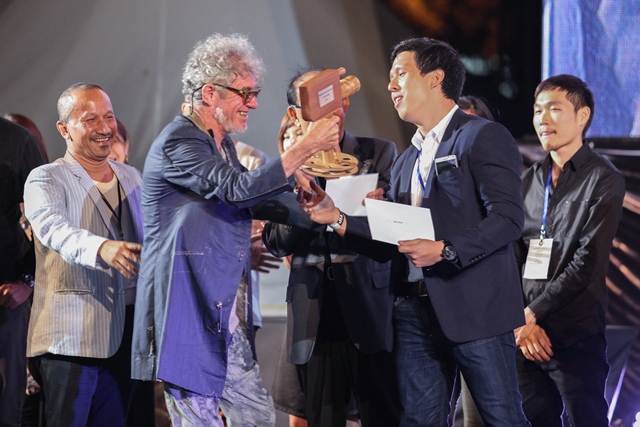 Over 20 years ago, John Polson started the Tropicana Short Film Festival (as it was originally known) as an informal short film screening for cast, crew and friends at the Tropicana Cafe in Sydney. More than 200 people showed up for that first screening. Inspired by the turn out, John decided that a full-fledged short film festival was the next step.
The festival has since expanded to become the world’s largest short film festival, and now includes screenings in New York, New Zealand, Abu Dhabi, and – since 2014 – Penang, Malaysia. The festival is free to attend and showcases the finalist films from the Tropfest SEA short film competition, which is open to all residents and citizens of Southeast Asia.


Coming from a family with a passion for filmmaking, Jake Soriano dedicated his life since 2009 to creating stories and translating them into visual language. He discovered his love for film production by first directing short amateur videos of his family and friends, which was then fueled by his receiving the best lighting director award three years straight in his high school's annual plautus (play) festival. This eventually developed into a passion that started his directing career at an early age, being given the opportunity to direct his first music video for Universal Records at 19. Now, he has been blessed with more than 30 music videos with companies such as Universal Records, Stages, and Polyeast Records, along with several AVPs and TVCs under his name in a span of only three years.

This achievement can only be attributed to how much time and effort he has put into learning the craft and improving himself as a director. In college, he left his original school, Ateneo de Manila University, to pursue his passion in DLS-CSB's Digital Filmmaking Program, simultaneously spending three of these school years shadowing established local advertising directors. He has also trained in post-production, honing a skill to see the final output even before the shot is framed.

With this, he measures his success by the emotions stirred in his audience by every frame that he puts on screen. He treats each project as if it were to be his best work yet, with an enthusiasm that never left him since the day he started directing.

Please tell us a bit about your short film.
My short film “Batang Bakal” (The Steel Child) is about a young boy who does something amazing for someone he loves. It is about hope. It is about achieving your dreams no matter how small or big they may be. I wanted to touch the hearts of people with this film and really show how we all can do anything we set our mind to.

Did you experience any challenges in producing your short film?
Time was the biggest challenge for me in producing this film. I shot the film the day before the deadline, edited it that evening, and scored it the day of the deadline. Although, time was on my side this time. It was a blessing to get everything done before submissions closed.

Did you produce any short films before entering Tropfest SEA?
This film was actually my first short film that I produced outside of film school. It is also my first time to enter a film festival.

What opportunities do you think Tropfest SEA will open up for you as a new filmmaker?
Firstly, Tropfest was an amazing experience that opened my eyes to so many new things. One of them was seeing how much talent there is around us. All the finalist I met had amazing stories and films that really amazed me. Seeing this gave me that extra motivation to constantly try to improve and be a better filmmaker. Secondly, it made me fall in a deeper love with creating short films. Working in advertising you don’t really get to see and feel the reaction of the audience. Compared to seeing your film on a being screen and feeling first hand the energy of the crowd. That is a feeling that can’t be found anywhere else. I love what I do, but I still want to make it a point to tell short stories whenever I have the opportunity to do so.

What is your opinion on the film industry in South East Asia and what are your hopes for the future of film industry in your country?
With all the talent in all these different countries, I feel the industry is just going to keep growing and improving. As long as we filmmakers continue to do what we love and have the opportunity for others to see what we have done.

Do you have any advice for all the future filmmakers out there?
My advice is just go out and make a film. Don’t let anyone tell you that you cant do it, or that the story is not worth being told. As long as you yourself believe in it and you know in your heart it is something you want to share with others, then go out and do it. The best school for film is just going out and doing it. Make mistakes and learn from them. Collaborate with others who have the same passion as you. Don’t be afraid to ask questions, to get bad critique and to make bad films. It is all part of the learning process that will mold you into the filmmaker you were meant to be. Immerse yourself in what you love to do and you have no place to go but up.