Over the last nine years, Romanian theatre went through a hectic but powerful journey. Some may argue that things are always evolving too slowly in Romania. However, a new generation of young directors and actors is emerging. They have started to work not only in the Romanian capital Bucharest, but also in different cultural centers such as Timisoara, Cluj, Sibiu and even Piatra Neamt.

Training and workshops: Theatre Without borders

In 2000, the state universities offered programmes for actors, directors and theatre critics, but the curricula was changing too slowly to meet the needs of the students. Back then, actors and directors couldn’t find any other trainings and workshops outside the state education. Thankfully, the field is more active now and the situation has improved. For example at the National University of Theatre and Film (in Romanian UNATC) in Bucharest, a two-year master programme in Playwriting and The Art of Scene Writing was introduced. The faculty has also been strengthened with visiting professors.

The first of the training and workshop programmes is Theatre Without Borders (Teatrul Fara Frontiere). Stemming from an idea that actress Mihaela Sirbu had, the company Theatre Without Borders was born in 1996. It is one of the first independent theatre companies in Romania which focuses on young creators, new and exciting plays and unconventional artistic models. Co-producing with ACT Theatre, its first successful performances include Bash. A Contemporary Trilogy by Neil LaBute, The Shape of Things by Neil LaBute, and The Country by Martin Crimp.

From 2007, Theatre Without Borders started to organise and partially fund master classes for actors. These included a workshop dedicated to Michael Chekhov and Sanford Meisner, Viewpoints- an improvisation workshop led by Thorsten Giese, an introduction to improvisation with the technique of Keith Johnstone.  Another workshop was also organized, combining the methods of Meisner, Chekhov and Buica. The latter is the founder and the artistic director of The Acting Corps, one of the best acting schools in Hollywood, with alumni such as Claire Danes, Leonardo DiCaprio, Tobey Maguire, Margaret Cho and Sasha Cohen. The workshop proved to be a contemporary perspective of the actors work.

Evolution of festivals as promoters of Romanian contemporary theatre

The phenomenon of theatre festivals has spread across the country in recent years, where many of theatre festivals became very popular for the general audience interested in culture. Some good examples are: Romanian National Theatre Festival, at its 19th year in 2009, Festival for Romanian Dramaturgy from Timisoara, which ran for the 16th time in 2008, Underground Arad Fun, in its 7th year in 2009, and International Theatre Festival from Sibiu which is at its16th edition. The International Theatre Biennale “Reflex” from Sfantu Gheorghe had its inaugural opening in 2009.

This festival development would not be possible without the continuous work of the selectors and the general managers that are, in some cases the theatres’ general managers. Ada Lupu-general manager of “Mihai Eminescu” National Theatre- and her team in Timisoara, Constantin Chiriac –general manager of “Radu Stanca” National Theatre - with his most successful international festival form Sibiu, and Laszlo Bocsardi-general manager of “Tamasi Aron” Theatre from Sfantu Gheorghe, Ovidiu Balint-manager of House of Culture, Victor Scoradet-artistic director and Victoria Frolova-producer from Arad. These dedicated individuals and their teams managed to build powerful programmes and structures, rich and different that produced real effects on the life of those cities in Romania.

The longest and the most successful theatre festival is the one from Bucharest, the Romanian National Festival. Its concept is to bring to a wide audience the best theatre practices of the last theatre season. Conceived as a major event in the capital city of Romania, this festival is organized by UNITER – The Theatrical Union of Romania, financed almost totally by the Ministry of Culture and City Hall. Even though it is state funded, the festival has managed to keep its selection clear from the political changes happening in Romania after the fall of the communist regime. For many years, this was the only festival that showed the trends of Romanian contemporary theatre, managing to bring to light the best productions from theatres outside the capital.

In Bucharest, two independent theatres emerged almost at the same time, responding to the general need of many young actors and directors who wanted to work on contemporary plays about contemporary struggles, the kind that didn’t have any place in state theatres. Therefore, ACT Theatre (run by the Romanian famous actor Marcel Iures) and Monday Theatre @ Green Hours (run by a theatre lover and a social activist, Voicu Radescu) opened their doors to promising directors, many of them successful now. These include among others, Theodora Herghelegiu, Vlad Massaci, Cristi Juncu, Radu Afrim, Marcel Top, Peter Kerek, Gianina Carbunariu, Radu Apostol.

From 2003, Impossible Theatre (Teatrul Imposibil) from Cluj, through its manager and director M. Chris Nedeea, actively promoted young creators and the latest trends in the performing arts field. It focused on the new playwrights, synchronizing present Romanian theatre with social and political realities and exploring unconventional spaces.

Targu Mures’ 74 Theatre is also another example of an independent theatre company with a difference. Their manifesto reads: “Alternative, independent, ruled by everything that translates with “new”- new (contemporary) dramaturgy, new (contemporary) literature, contemporary imitative arts, stage-directors of today, young actors – here’s what THEATRE 74 managed to promote and to present to its audience, a theatre set up five years ago in The Butcher’s Bastion at Tirgu-Mures Fortress, a butcher that began to include and tell beautiful stories about theatre and the world that contains it.” The founders are all from theatre field: Nicu Mihoc, Theo Marton, Laurentiu Blaga, etc.

And we can’t finish our short introduction of Romanian independent theatres without mentioning the one from Timisoara - Aualeu Theatre, a young but dynamic theatre that performed its first production in a garage, an idea continued by its founder, Ovidiu Mihaita.

About the writer:
Florentina Bratfanof has worked in the theatre field in Romania in the past 9 years, first as a Press Officer for ACT Theatre, the first independent theatre in Romania, then as a cultural journalist for an online platform website also about theatre events and projects. She has been involved as well the Press Office of several theatre festivals; the 2008 edition of Romanian National Theatre Festival, Bucharest, Romania; Underground Arad Fun 2009, Arad, Romania; 36th International Festival of Alternative and New Theatre, Novi Sad, Serbia; and again 2009 edition of Romanian National Theatre Festival. 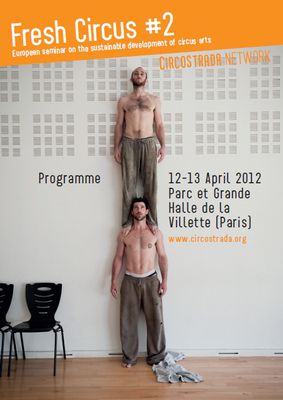