Recalibrating the Compass: Sustainable and Ethical Practices in the Cultural Sector – Roundtable #3 - Report 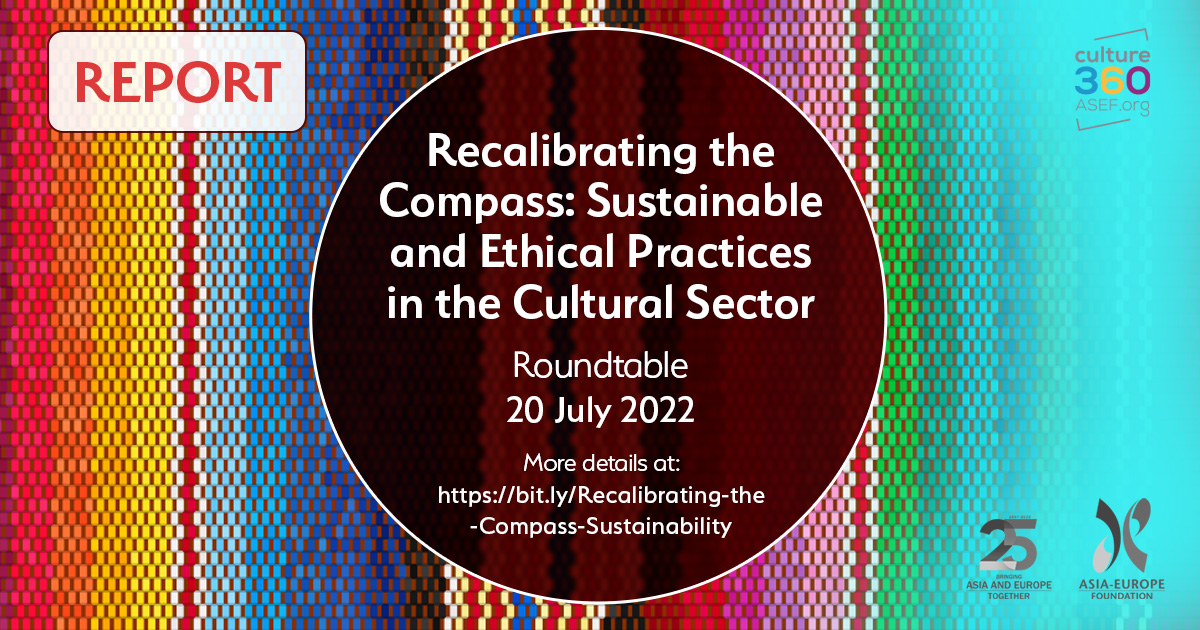 In 2022, on the occasion of the 25th anniversary of the Asia-Europe Foundation (ASEF) and following the global impact of the Covid-19 pandemic, ASEF has launched a series of online roundtables entitled Recalibrating the Compass: What Future for Asia-Europe Cultural Relations? The series aims to examine current challenges and identify ways to develop new, more relevant and resilient forms of support for Asia-Europe cultural collaboration.

The third roundtable, Recalibrating the Compass: Sustainable and Ethical Practices in the Cultural Sector, took place on 20 July, gathering 9 professionals from across Asia and Europe. Facilitated by Prof. Dr. Amareswar Galla (UNESCO Chair on Inclusive Museums & Sustainable Heritage Development, Anant National University, Ahmedabad, India), the session addressed a range of themes related to ethical and social sustainability in cultural management and cultural relations. Among the issues addressed were the recognition and preservation of minority and Indigenous cultures, the promotion of rights-based approaches in cultural organisations, and the fostering of fairer approaches in international cultural exchanges. This short report outlines some of the main arguments presented, the themes that emerged, and a few illustrative examples identified by participants. 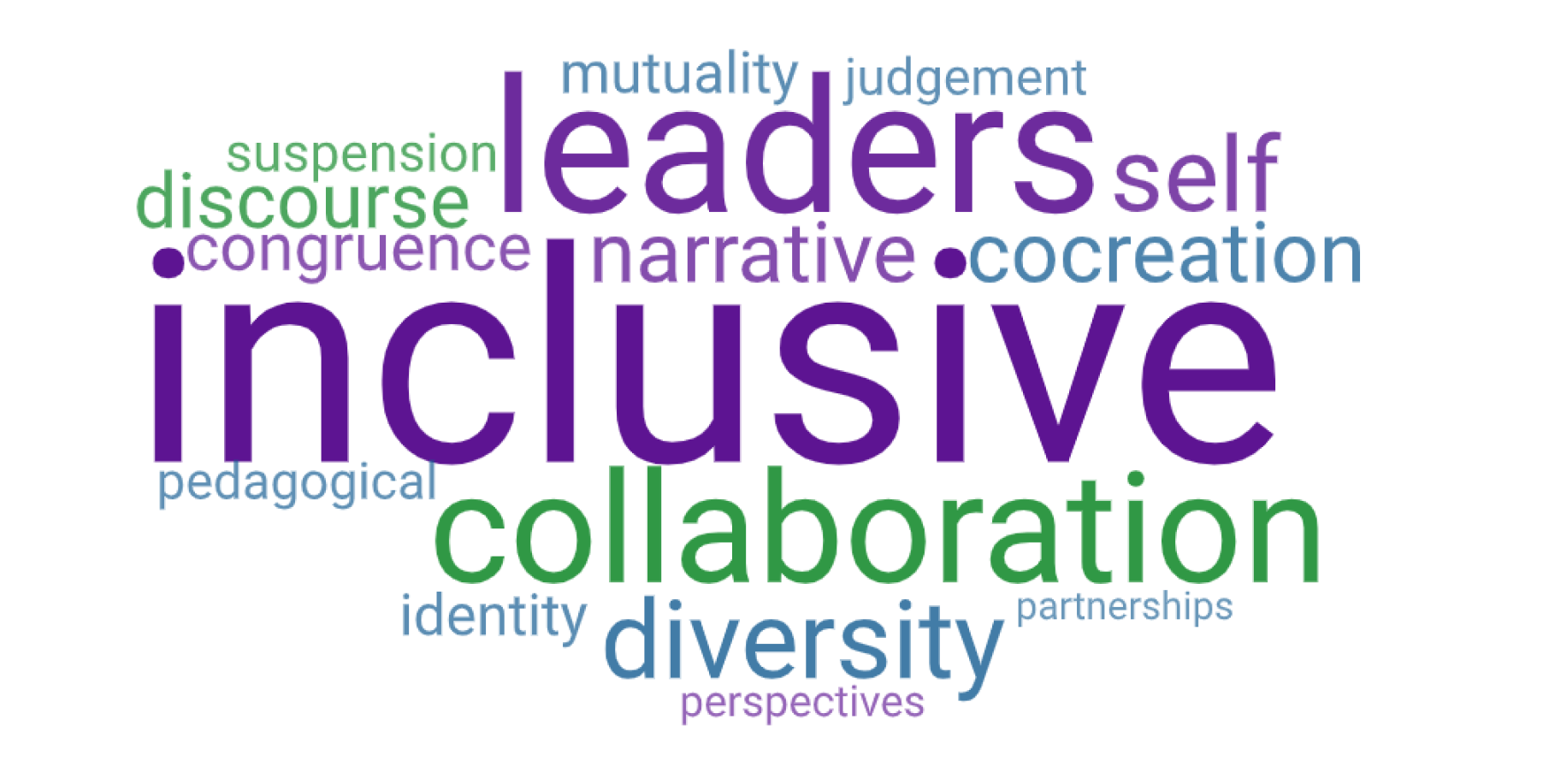 As in other areas in life and work, reflecting on ethics leads to considering whether there is congruence between what we think, say and do – that is, to what extent cultural professionals and organisations display in their practices the values reflected in their mission statements or project descriptions. Given that access and cultural diversity are frequently central to organisations’ mission statements, they should, for instance, be particularly attentive to the conditions that enable or hinder cultural participation among specific groups (e.g. Indigenous and other minority groups), as well as consider labour conditions in the cultural sector, including the engagement of volunteers and low-paid staff.

In this respect, participants suggested some approaches and tools to increase fairness. The principle of free, prior and informed consent (to which sustained consent is frequently added, implying continuity in the consent given) should prevail when dealing with Indigenous peoples as well as other groups. Integrating a rights-based approach in the work of cultural organisations, and therefore paying particular attention to disadvantaged groups and their effective ability to access and participate in culture, is another useful orientation. Adopting human rights as guiding principle should also lead to being aware of broader aspects related to human rights and democracy in society.  In this respect, some participants pointed out regretfully in many countries, democratic spaces are shrinking, affecting in particular disadvantaged and vulnerable communities.

In keeping with the aforementioned aim for cultural organisations to engage with more diverse communities, some participants warned that frequently, cultural organisations work with a relatively limited number of artists and partners and tend to cater for relatively small audiences. However, it is worth noting that several organisations participating in the roundtable are actively engaged in working with minority groups and communities. Among others are SAKA, an alliance of artists and cultural workers that collaborates with agricultural workers in the Philippines; Struggles for Sovereignty, an Indonesian collective platform that connects art, food, farming, land rights, Indigenous and ecological activism, and aims at fostering social and ecological justice; and Tuyang, a community-led arts management company representing and working with Indigenous people across Malaysian Borneo. Another example mentioned during the discussion was the AKS International Minorities Festival, a film festival in Pakistan that aims to create a dialogue around the representation of minorities, including migrants and LGBTIQ+ communities, and which has managed to remain resilient during the pandemic.

Among the ways in which cultural organisations, including those that provide funding, can contribute to diversifying the cultural scene are designing more accessible and user-friendly calls and application forms (e.g. making them available in more languages, and simplifying requirements), diversifying partnerships, and reaching out to rural areas and smaller urban centres. Furthermore, there is a need to devise forms of collaboration between groups of different nature, challenging traditional relations and enabling sustainability. Some inspiration in this respect could be provided by the recently-published book Radical Friends: Decentralised Autonomous Organisations in the Arts, which examines the potential of blockchain and ‘decentralised autonomous organisations’ (DAOs) to enable new partnerships in the arts.

One important step towards generating fairer and more equal relations within countries and across borders is to enable encounters and mutual recognition between different groups, which would rarely meet otherwise. This is particularly important in a context where, as some participants pointed out, fear often prevails in approaching those who are different. It is necessary to rebuild these personal relations, especially after the last 2 years of pandemic.

There are several examples that show how cultural organisations are particularly well-positioned to facilitate such meetings. Ci.CLO, a platform for artistic research, production and intervention in the medium of photography based in Portugal, facilitates ‘immersive’ experiences in which resident artists are hosted by families in rural areas. Another interesting example is ‘Sound of the Soul’, a recent sound art exhibition at the Bangkok Art and Culture Centre (BACC) that explored the dialects, sounds and cultural stories of marginalised ethnic groups in Thailand, enabling urban audiences to become familiar with the reality of communities distant to them and often marginalised. Another significant encounter, ‘MEEPAN’, was facilitated by the Singapore Chinese Orchestra and Tuyang, connecting Indigenous music and vocal tradition from Borneo with orchestral compositions. The performance was presented this year in the context of the Singapore International Festival of Arts.

Among other interesting cases, the Centre for Heritage Arts & Textile (CHAT) in Hong Kong uses storytelling to stress how the stories of others are connected to the everyday reality of audiences, e.g. between the work of fishermen and urban audiences who consume fish. CHAT is also one of the promoters of the Textile Culture Net, a network connecting textile museums and art institutions across several countries, bridging the gap between traditional textile heritage and contemporary practices in this area.

Fostering connectedness and regeneration through practice and knowledge-gathering

Considering sustainable and ethical practices in the work of cultural organisations, and connecting with Indigenous and rural communities, can lead to considering our relation with the environment and the climate crisis, something which had also been addressed in Roundtable #2 of Recalibrating the Compass. Participants to this roundtable suggested that approaching nature in an ethical and fair way could involve recognising non-human species as part of the ecosystem in which cultural organisations operate, embracing a notion of connectedness and holism towards the environment, and recognising the value of custodianship of nature and the landscape as reflected in the practices of traditional communities.

This could also lead to adopting a regenerative approach towards natural spaces, as illustrated by Ci.CLO’s Sustentar and Vivificar projects, which have included activities aimed at regenerating river areas in Portugal and compensating the carbon footprint of these activities. The holistic approaches necessary in this respect call for combining different types of knowledge and establishing suitable partnerships. The Forests in the Anthropocene: Perspectives from the Philippines report published by the Forest Foundation Philippines was mentioned as a good example in fostering cross-sectoral collaboration for forest preservation.

More generally, cultural organisations can have a role in collecting data and disseminating knowledge, through consultations, research and publications, as exemplified by the British Council’s Crafting Futures programme, which supports the future of craft globally and has involved, among others, the establishment of an international knowledge exchange platform and a report on needs and opportunities in the Philippines craft sector.

Fairness needs to be reflected in international cooperation

When looking at relations between Asia and Europe in this field, some participants argued that many societies are increasingly looking inwards, particularly in Europe, where a focus on domestic affairs at the expense of international dialogue increasingly prevails. In this respect, cultural professionals and organisations have the ability to facilitate transnational encounters and togetherness beyond national narratives.

They should also consider which borders they establish in their practice, and to what extent their international work is framed by national agendas and based on inequality. Initiatives related to decolonisation in the arts and culture can provide relevant guidance in this respect, as exemplified by the University of Arts London’s Decolonising Arts Institute. 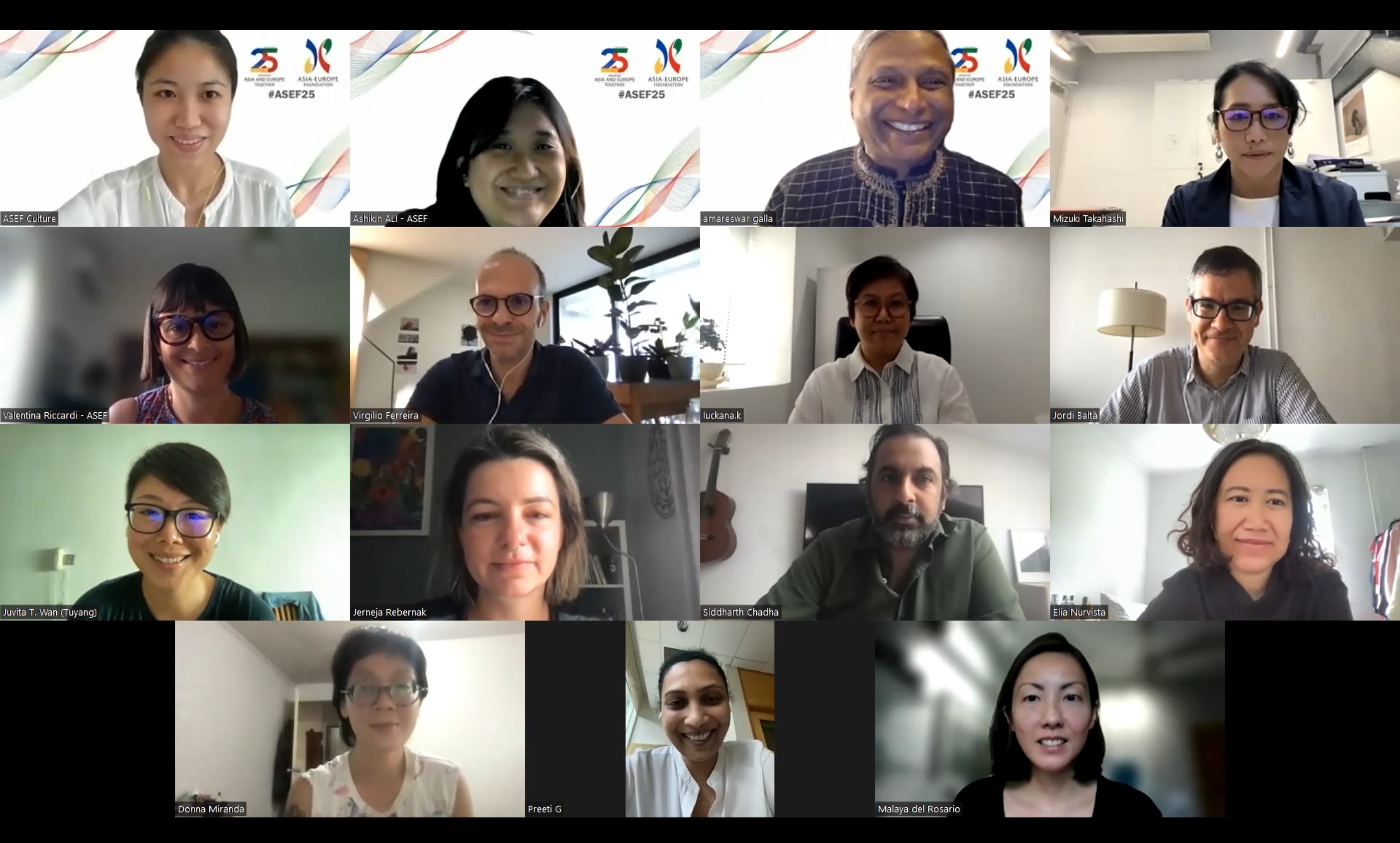 The 3rd roundtable in the Recalibrating the Compass series illustrated yet again the wealth of experiences existing among cultural organisations in Asia and Europe. It showed how practice is connected to reflections on sustainability and ethics. The examples presented in this article are just a few of the many that exist in this respect. The series will continue with 2 new sessions between August and October and will culminate in a public webinar, where findings and recommendations from all sessions will be shared and discussed.

ASEF would like to thank the following participants for their valuable contributions to Roundtable #3 – Sustainable and Ethical Practices in the Cultural Sector: 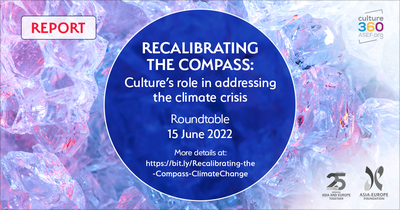 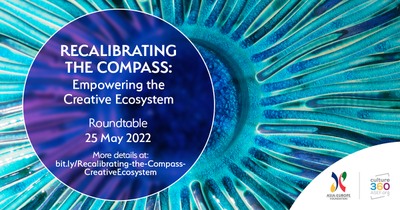 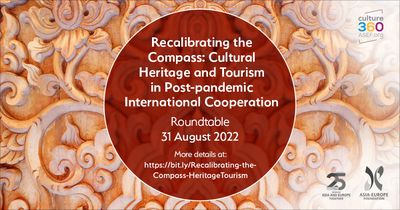