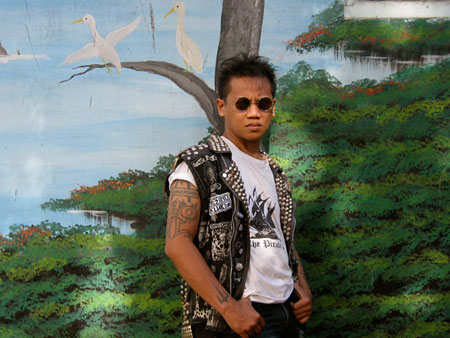 Since 2011 and until 2021, the Jogja Biennale will put its attention on the Equator region. This year, the third edition of the Equator Biennale is a dialogue between Indonesian and Nigerian artists.The idea behind is “Hacking Conflict”, with agonism as one of its main concepts. Katerina Valdivia Bruch interviewed Wok The Rock, curator of the Jogja Biennale.

As an artist, you have been involved in a variety of projects: you were one of the founding members (and currently Artistic Director) of the photographer's collective MES56, you had your own punk band called “Demi Tuhan” (For God’s Sake) where you were the lead singer, run the netlabel “Yes No Wave Music”, created the online video platform “Video Battle”, worked as a designer, book editor, curated exhibitions and music related-projects and organised electronic music gigs, amongst other endeavours. How do you connect your experience in the arts with your current position as curator of the Jogja Biennale?

This is the first time I am curating a big arts festival. And, in fact, it has been a challenge for me to integrate my diverse practices into this biennale. The way I am introducing my ideas has been through the inclusion of interdisciplinary art practices, which have been emphasised less and less by curators and galleries in Indonesia since 2007. For the biennale, I decided to invite participants with different backgrounds, such as visual artists, musicians, actors and theatre makers, but also dancers, book editors, journalists and cultural activists. We worked collaboratively with them to strengthen the themes, ideas and interventions of the biennale. The outcome was a variety of artworks produced for the exhibition, that include performances, books, videos, photographies, installations, paintings and event-based artworks. We also transformed the exhibition space into a place for activities and collaboration with visitors. In this way, the overall process reflects my artistic practice.

As far as I know, the word “hacking” is mostly understood as a form of online activism, that happens by intervening, accessing, altering, but also by offering encrypted information,  usually inaccessible for normal Internet users. In which way do you use the word “hacking” as part of the biennale concept?

Yes, the term comes from the digital area, but in this case I have used it as a form of “social hacking”, as an intervention or comment on social, cultural and political issues. The term has been applied to many other practices. For the biennale, I took the ideas of chaos, difference, opposition and conflict as a way or tool to create a sort of “unstructured structure”. My ideas are based on the agonism theory by Belgian political theorist Chantal Mouffe.

Another word that came up to my mind after reading the curatorial concept is the word “intervention”. Among the exhibited works, are there some interventions happening in the public space? Are there also community projects happening during the biennale?

In the beginning, I was interested in artistic interventions, but unfortunately I could not find many of them in Nigeria, which is our biennale partner in this biennale edition. This was the reason why I broadened the concept and focused my attention on the agonism theory. The outcome has been very diverse. There have been interventions on visual arts discourse, such as Mardi Wuta by Joned Suryatmoko– a performative exhibition and guided tour given by a blind man where visitors are also blindfolded. Suryatmoko invited people to see the artworks by imagining them. Another example is the work by Ketjilbergerak, an artist who worked with young people from different local communities to create a temporary creative park, entitled Taman Tiban, by occupying the outdoor space of the Jogja National Museum. There is also a piece by Indonesian artist duo Irwan Ahmett and Tita Salina. Together with theatre maker Yudi Ahmad Tajudin, they proposed an addendum to the “Giyanti Agreement”, an agreement initiated by the Dutch which separated the cities of Yogyakarta and Surakarta in 1755. The project was presented as a performance of speech, dance and music held at the site in Surakarta where the agreement was signed. Furthermore, we are showing a sound installation by Punkasila, an artist collective whose works comprise visual arts and music. They were interested in addressing the sonic noise that emerge from political party campaigns and parades of football supporters. They modified the loud motorbike exhaust pipe into a brass music instrument, that was played on stage and the street as a kind of parade. Additionally, we also presented the work of Tarlen Handayani, who cut out texts from mainstream newspapers and asked visitors to form their own words with them. In short, the concept of intervention is explored in many different ways.

This year, both the Jogja Biennale and the Jakarta Biennale are taking place at the same time. Is there any connection or cooperation between both biennales? What do you think about having two biennales running in parallel in the same country?

There has been no cooperation between both biennales. This year, we also had the Makassar Biennale and the Jatim Biennale – a biennale focused on environmental issues. I think it is a great opportunity to host and experience all these different biennales at the same time. All of them showcase the development of recent art practices. As such, people might get a glimpse on Indonesian contemporary art. It would be great if, in the near future, all these Indonesian biennales would be connected.

Curated by Wok The Rock and Jude Anogwih

Katerina Valdivia Bruch conducted the interview. She is a Berlin-based independent curator and arts writer, who has curated exhibitions for a number of institutions, including ZKM-Center for Art and Media Karlsruhe, Bielefelder Kunstverein (Bielefeld), Grimmuseum (Berlin), CCCB (Barcelona), Instituto Cervantes (Berlin and Munich), Instituto Cultural de Leon (Mexico), Para/Site Art Space (Hong Kong), and the Institute of Contemporary Arts Singapore, LASALLE College of the Arts. In 2008, she was co-curator of the Prague Triennale at the National Gallery in Prague. Besides her work as a curator, she contributes with essays and articles for art publications and magazines, focusing mainly on art in the social context of Southeast Asia and Latin America.

View other articles by Katerina Valdivia Bruch for culture360.asef.org