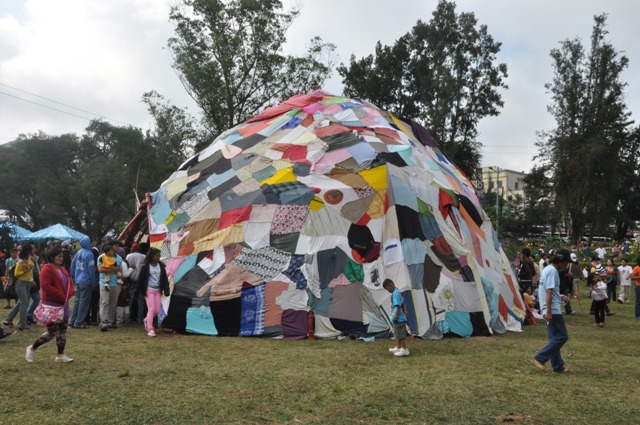 The article discusses two artist-run public art initiatives launched alongside the National Commission for Culture and the Arts National Festival in Baguio, Philippines,  February 2011. It examines strategies inherent in these alternative platforms for public art.

The Ax(is) Art Project initiated by Baguio-based artist Kawayan de Guia, had for its goal the communal sewing of a big tent later installed in the Rose Garden of Burnham Park. Transient Studio, on the other hand transformed the decrepit site of Camp John Hay’s public library into an exhibition space for artists gathered by Chris Yniguez. The ‘communal’ and the ‘accidental’ figure prominently in the transformations facilitated by these projects, as gleaned from their expressed aims as well as sites chosen for these events.

Though artists have had a long-standing preoccupation with art’s publics, this interest has taken a marked shift towards a cognizance that the sphere of the public has less to do with space’s architectonic character. Thus, Patrick suggests space has begun to be understood as ‘place-less’, ‘increasingly elusive’ and invested in events that are ‘dispersed in radical intervals’.

I will explore in the following paragraphs these turns through locally grounded discernments of the ‘temporal and the place-less’ as expressed in public art projects informed by collaborations with state culture agencies and local government units.

Burnham Park and Camp John Hay library are public spaces strongly rooted in Baguio City’s history. Chosen as sites for Ax(is) and Transient Studio, they were engaged in ways grounded in the temporal, the fluidly orchestrated and the temporary. Both projects share a preoccupation with bringing art ‘closer to artists and non-artists’. While this may sound as grand as aims professed by more traditional state-and corporate- sponsored public art projects, both De Guia and Yniguez temper this pronouncement with understandings of place as ‘organic’ and changing. This can be attributed to their strong attachments to Baguio as home. Artist Kawayan de Guia in typical self-deprecation calls Axis an ‘accident waiting to happen’ while Chris Yniguez laughingly calls his own installation for Transient Studio ‘nearly indulgent’. Both recognize how elusive these publics are and if art is to be responsive, its ambiguous nature has to be embraced.

Opposed to rather grandiose claims others have made for public art, Ax(is) Art Project and Transient Studio had more intimate, small-scale goals. Yniguez fittingly describes Transient Studio as a project grounded on site as ‘a condition’, a shifting and changing given. De Guia on the other hand, imagined the tent to travel and make stops where conversations and encounters may happen.

Ax(is) Art Project was for De Guia a shared risk and the challenge it posed to the artists involved was ‘the search for a common ground’. Largely an artist-run festival, it had an interesting mix of participants that included those based in Baguio like De Guia and Ubbog, a local writers’ group and those invited to bring over pieces or take part in the events. Local artisans participated, their skills showcased alongside internationally known contemporary artists. Axis combined site installations, musical events, creative workshops and performances. Contemporary pieces where shown in unlikely places like the Katipunan bar in the city market, an old haunt for farmers and miners.

The Axis tent where De Guia envisioned these collaborations to take place was sewn together over a period of weeks, in different sites in the centre of Baguio. Clothing discards were sewn by students from three local universities, as De Guia wanted Baguio youth to primarily take part in the project. Drawing from the famed second-hand clothing trade in Baguio, the tent is marked by the endless trails the clothes took as they were traded from one city to another. The conversations silently witnessed by these objects anticipate those forthcoming in the tent soon to be installed in the park. 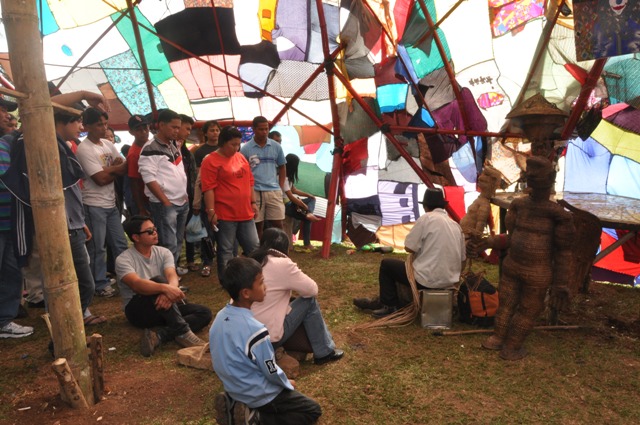 De Guia emphatically notes that Axis is deliberately open-ended and was more about the creation of networks in a place where these connections are likely to happen. Organized over a period of three months, it relied on funding originally earmarked for a regional cinema festival. Axis was thus, envisioned to be a ground where film and the visual arts converge.

More than this, it turned out to be a melting pot of diverse artistic practices. Another characteristic that sets the project apart from its counterparts in Manila is its pronounced reliance on a loosely-formed acquaintance and relations among Baguio-based and visiting artists. Apart from Ubbog, the rest of the participants were not members of any artists group or collective, a pronounced contrast to projects of a similar nature organized in Manila.

Privy to initial plans for Ax(is), Chris Yniguez proposed that he open the space he was then using as a make-shift studio to audiences. Moving from Los Angeles with his family, Baguio was home to Yniguez for three years. Transient Studio was installed in Camp John Hay’s old public library, a vast, unlit, near-abandoned space at the heart of the park. Similar to Ax(is), Transient Studio was founded on collaborative language and the conditions of site, or as Yniguez puts it ‘site as condition’. The entrance space is framed by an arch of woven tree branches and is filled by numerous installation pieces. One is struck by how the works all breathe the character of the site – an infinite fragmentariness. 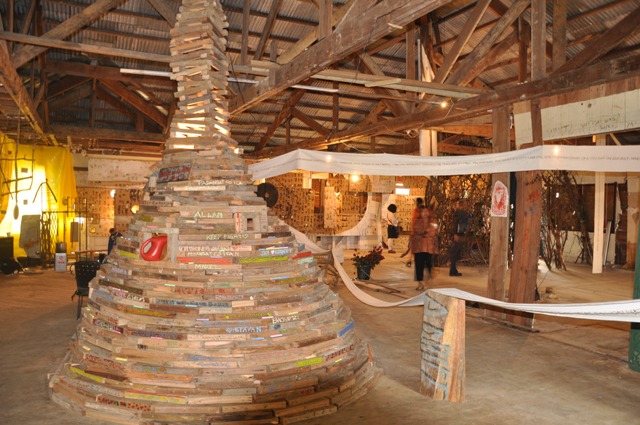 Transient Studio is aptly called an ‘organic and collaborative environment’, its ‘rawness and ambiguity’ redeemed as impulse and possibility. Participants in the collective installation project regard it as a growing, expanding conversation not only among artists but communities as well. They saw themselves as ‘temporary residents and permanent visitors’ to Baguio.

While Ax(is) Art Project showcased motley of artists, Transient Studio housed the works of  just eight. These were Chris Yniguez’s Dirty Nothings, Ubbog’s entrance arch of branches which to them is material metaphor for the womb; Allan Carino’s poetry burnt into a long canvas strip trailing the studio and beyond; Rommel Pidazo’s rubber form figure, Indonesian artist Elida Tamalagi’s film The Miraculous Journey of Lucy von Pelt and her collaboration with Carlo Villafuerte, a wooden igloo sanctuary where love letters are gathered.

The film was screened beside a fireplace in the library’s inner space where a series of Kidlat de Guia photographs in light boxes were ingenuously installed. Indeed when one considers in earnest, these works reel the thread binding past to present and the ties between the fleeting and that which endures. Utilizing what the site offers, these artists meld Baguio’s colonial past as an American hill station with the present threat of encroaching corporatization. 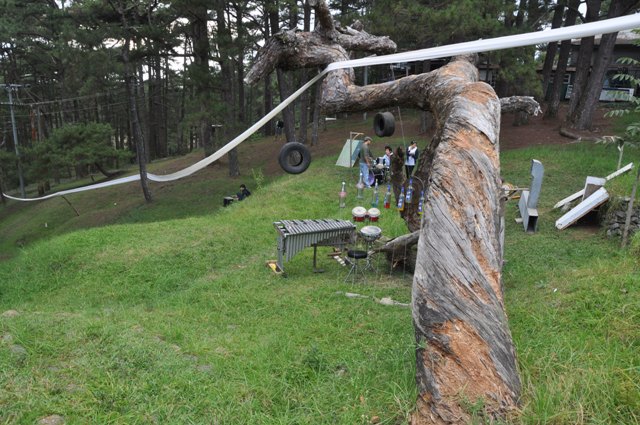 Yniguez shares that the public library will soon be demolished. Traces of this past can be discerned in Yniguez’s discovery of worker’s boot prints in the wooden cladding for the library’s ceiling as well as Kidlat de Guia’s photos referencing traces and remnants of the old Camp John Hay. The alcove of dried branches was sourced on site likewise the wooden blocks used for the sanctum by Villafuerte and Tamalagi. The opening event was a mix of music, installation pieces, film and film projections.

The Ax(is) Tent has since been brought to Benguet and Transient Studio whose fittingly short life has since then been transformed in Alan Carino’s and Chris Yniguez’s recent installations at the Picasso Gallery in Makati. While arguably a different form, the latter uncannily has vestiges of the Baguio piece and the relatively small space of the gallery seemed unable to contain the expanse of connections already made in Camp John Hay’s public library. Both projects are envisioned to morph in ways that respond to site and its audiences. This supple quality lends them strength. While the tent may or may not travel around Baguio and elsewhere and the public library perhaps will soon be gone, the spirit in which the projects were founded is sure to thrive.

Tessa Maria Guazon is assistant professor of Art Studies at the University of the Philippines-Diliman. Published essays in Aghamtao (Anthropology Journal), the Philippine Humanities Review and Pananaw examine contemporary public art practice, cities and art’s publics. A forthcoming essay in an international journal on urban issues proposes artistic mediations of urban conditions. Her art critical reviews on exhibitions and film have appeared in Humanities Diliman and Asian Art News. She is currently at work on a university-funded research grant on contemporary commissions for public art in Manila. 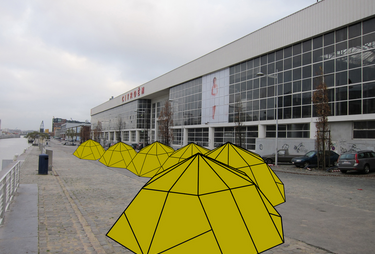