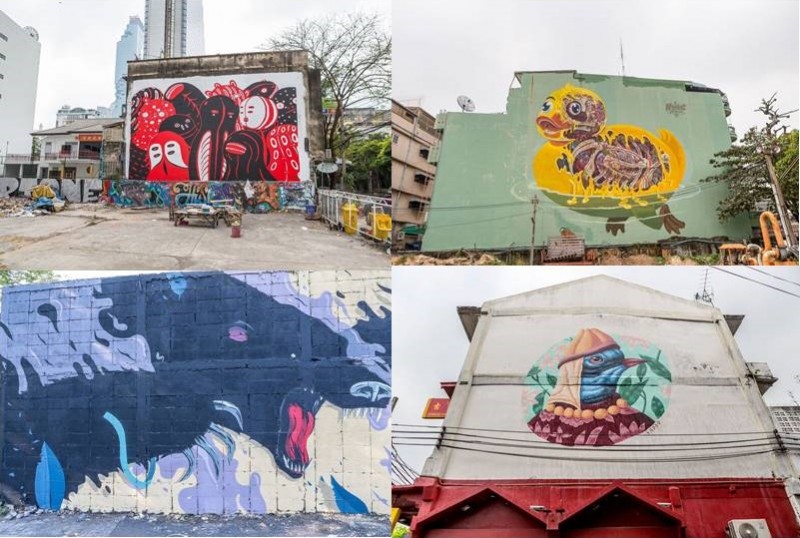 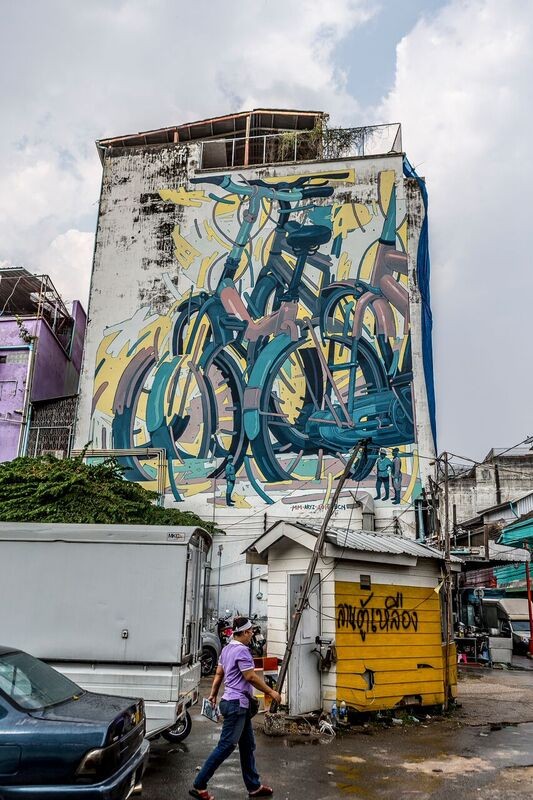 
ARYZ - Every concept of mine starts with a wall, with what the specific location instills on me. At first I had another idea in mind for this intervention for BUK RUK but changed a bit after discussing some sketches with the neighbours. I decided to do the bikes composition for many reasons, but mainly due to the context of the surroundings. Chinatown’s Bang area appears to be a very distinctive area of Bangkok.

While creating my outdoor murals, I usually enjoy playing around with the city, connecting through my visual language and adapting the color-scheme to provoke a ‘soft invasion’. My aim is to offer a positive change through art and of course generate opinions but always in a very respectful manner.

DF - Why is street art important? What do you hope to accomplish or communicate through creating your art in public spaces?

ARYZ - I truly believe street art is an important vehicle to introduce common people to the world of visual arts. It fosters interest and appreciation for all visual art disciplines and inspires and engages people by using public spaces. My only artistic commitment is to offer something to the street art movement, to raise awareness and inspire others to follow and create. 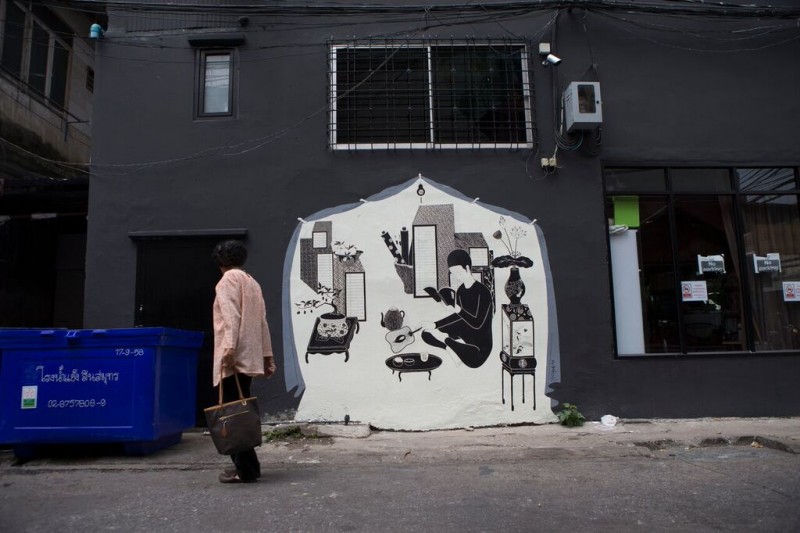 DK- This is actually the first time I created a mural painting for an outdoor festival. Before I started putting some lines together, I tried to talk and interact with the community as much as possible in order to listen and receive some feedback about the area. And also allowed some time to see how other artists were doing their paintings. All in all, I developed my visuals as always, following a similar process than when I do drawing on paper.

DF -Why is street art important? What do you hope to accomplish or communicate through creating your art in public spaces?

DK - As I said, I haven't done wall painting before. I think the good thing in muralism is communicating and connecting with the locals. I tried to capture genuine elements that represent Thai culture. The wall that I was working on was located in the entrance of Chinatown, near the riverside. So I would like to give local neighbours reasons for what they can be proud of by looking at their cultural background and capturing how masterfully they are able to harmonize many different traditions in same area. DB -To come up with a good concept for this wall was quite a puzzle. The wall has extreme measurements. Half of the wall is hidden behind taxis, and the other half is used as parking space for motors and for street food vendors. For a decorative design all this wouldn't matter that much, but I normally work quite conceptual and minimal. So for me it was important to find out what part of the wall was most visible during the day and then to concentrate on that part for making a concept. Finally I decided to literally make a puzzle of it. There are three parts of a giant human character bathing in a colorful water stream. If you take pictures of the wall and later edit them on your computer, these three parts can be stacked on top of each other to form one bigger image. It's a bit improvised, but the problems this wall created for me actually provided me lots of ideas for future projects.


DF - Why is street art important? What do you hope to accomplish or communicate through creating your art in public spaces?

DB- It is important that we as residents also can make our mark on our environment, that it's not only a playground for city planners and advertisers. And what I hope to accomplice is to involve people in the creation of a story. My images are metaphorical, but I never really know what is going on. I start a story, and passing by people will tell me what it is about, what they see in it. All of these stories and explanations are true. Many times a title for a wall painting is derived from one of these conversations with the audience. 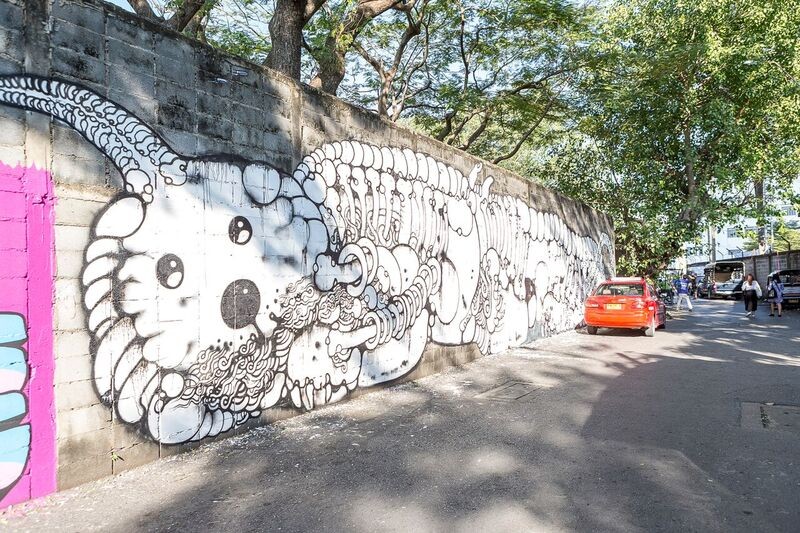 Talk us through the ideas behind your intervention at BUK RUK Festival here in Bangkok.

LOLAY – I normally create my artworks mostly by painting, usually secluded in my studio and only rarely I do street art or wall painting. In fact most of my previous works are on paper and canvas. Truth be told, I have recently painted on the walls at my friends' house, but that’s all. For this unique occasion I decided to paint homeless animals that nobody really care about.. Because they are also members of our urban landscape, I see them and I think about how they can make us think about how we can altogether create a better city.

Why is street art important? What do you hope to accomplish or communicate through creating your art in public spaces?

I believe street art is a central figure and most established form of public art. I would like to reach out to as many people as possible including people happen to walk by the wall that I painted. This is very different from when I exhibit in other indoor art spaces. Because the final result is exhibited every day, itis art to walked along with on a daily basis. The wall has already become a part of the urban environment and local community. Not being showcased in a specific space like a museum, makes it very accessible, they can touch it or get closer or look at it for as long as they want. Apart from that, for me, it will become a living painting: Time, rain, wind, bystanders…all these different factors will eventually bring life to the wall, not just the paint itself.

All photos courtesy of © PMP Agency - All rights reserved