Two photographers have embarked on a Burmese book project documenting the crumbling British colonial-era architecture for which the capital Yangon is renowned. It raises questions about the conservation of architectural heritage in Myanmar.

“There’s no trace of Hong Kong’s colonial past left in the city’s architecture – it’s all been torn down.” “The city has lost its historical architectural identity. Don’t let that happen to Yangon!” It’s stern warnings like these that came from a range of experts who attended the recent Yangon Heritage Trust’s International Conference.

The YHT put out a call out for help to save Yangon’s colonial buildings, and documentary photographers Jacques Maudy and Jimi Casaccia felt compelled to answer. The result is a stunning body of images of these buildings, soon to be published in a glossy high-quality publication titled Yangon, a City to Rescue.

Yangon is an Asian city on the cusp of rapid growth and change. Fast-built sharp, modern buildings might be sprouting-up quickly, but there’s no crowding-out of the stunning and intact architectural jewels that help tell the story of Burma’s colonial past. Wander down just about any street in the city of six million people and you’ll see them – from apartment buildings, to dramatic public structures.

The body of work, taken on behalf of the Yangon Heritage Trust, founded by prominent Burmese historian Thant Myint U, offers quality imagery and fine detail in saturated color with a special feel for the monsoonal mood of the former capital.

The trust received a significant boost when Australian Foreign Minister Bob Carr visited the city, formerly known as Rangoon, in June and pledged his government’s support and expertise to help protect the nation’s rich architectural heritage.

There is deep concern that with the recent easing of economic sanctions, a drive for development may pose a serious threat to the significant yet fast-decaying examples of 18th century design. Many buildings are in need of serious restoration after years of idle neglect.

Already, as a direct result of the trust’s work, the government has reportedly suspended 20 building permits until the subject of conservation can be clarified. 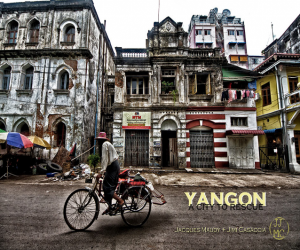 Read review in The Irawaddy

Read more about the publication Yangon: a city to rescue and view more images on the photographers' website