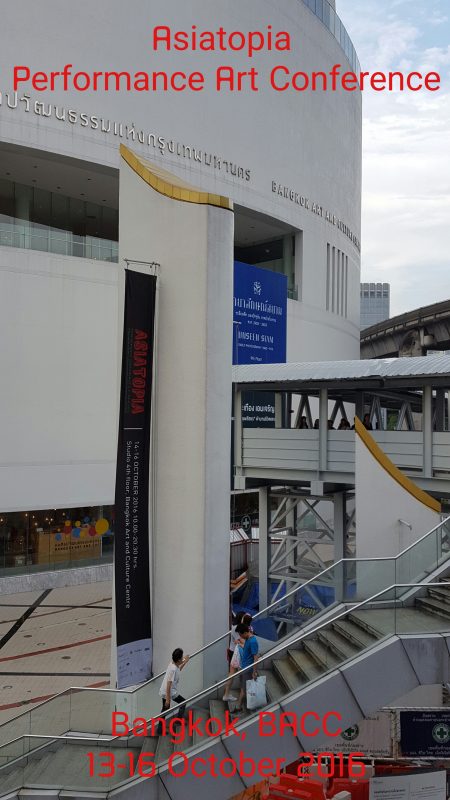 From 13 to 19 October 2016 in Bangkok, Thailand, Asiatopia Performance Conference 2016 gathered over 120 among artists, curators, writers, historians and theorists to discuss and document the development of performance art in Southeast Asia. The common thread throughout the panel discussions and presentations was to collate personal experiences and stories that would help trace the origins of performance art in the region. The Conference organised at the Bangkok Art and Culture Center (BACC) allowed pioneering artists and curators of the first generation of performance artists to confront ideas with younger generations of artists from Myanmar, Viet Nam, Cambodia, Lao PDR, Indonesia, Philippines, Singapore, Thailand, Malaysia as well as Germany and Finland in an open and non-confrontational space. 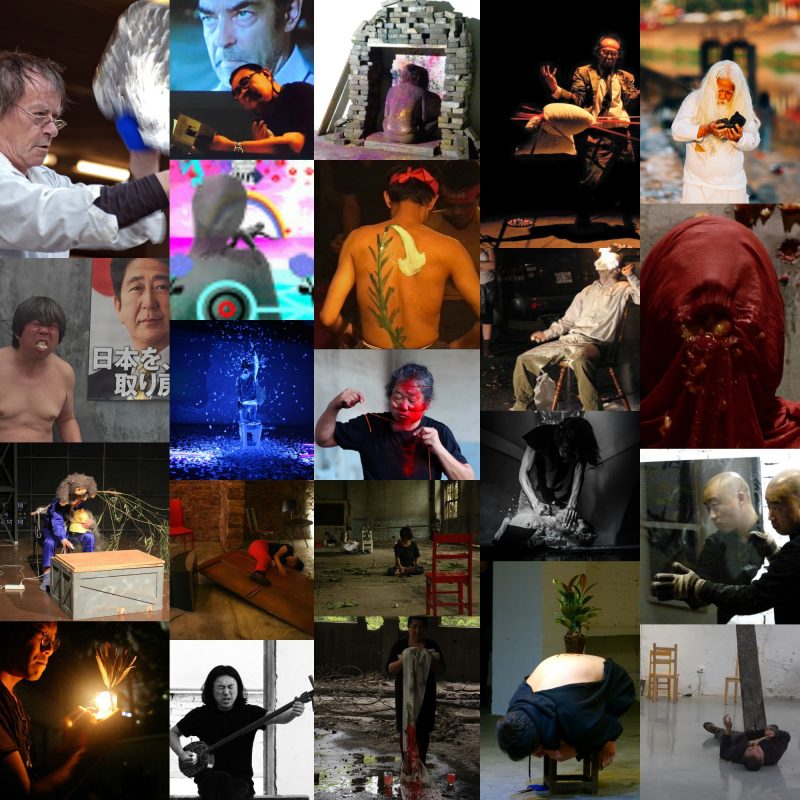 Here are some of the key issues that were debated during the Conference.

Dr Apinan Poshyananda, celebrated artist and curator and Thailand’s Permanent Secretary for Culture opened the Conference by highlighting that performance art is often meant as a provocation to question identity and bring issues to the limit, through the use of the body. He also mentioned that performance art is about connectivity and the nodal points are in Bangkok, Manila, Yogjakarta in the region. He also reminded the audience that performance art ‘can be very kind and healing, it uses almost nothing but yourself to say something’.

According to David Teh, researcher based at the National University of Singapore, the nature of performance art is to be ephemeral, unpredictable, difficult to commodify, politically challenging, mostly associated with activism. In this art form, the artist’s body is often the medium and the actions that are performed lived by the artist are the work of art. The relationship between the audience and the performer is also central to performance art. Younger generation of artists tend to use new alternative mediums such as social media, Instagram, infographics. Most of the artists involved in the conversation seemed to consider it very much as a discipline of its own, distinct from visual arts.

According to art historian Eileen Legaspi Ramirez, the ephemerality of performance art makes it very difficult for art history to grasp it and categorise it. It is often perceived as theatre activism. Performance artists are often associated with activism but not all artists are activists. Some are making “activist art” to engage with the public (Iola Lenzi, researcher, curator and critic)

The unique aspect of performance art in this region is that it generates from the local context. Localism is the historic thread of performance art in Southeast Asia and it is also a way to valorise it. This approach is unique to Southeast Asia and does not have the same origins than in the West. ‘The genesis of Performance Art is to be born out of local circumstances both political and social’, says Chumpon Apisuk.

Artists in this region are working very closely with communities engaged in issues such as urban development and environment, issues that are close to their heart. By taking over public spaces, artists challenge authorities and establish a direct connection with the public and with non-art inclined audiences. In this sense, it is an art form that is more “democratic” and does not limit itself to the white cube. ‘Performance art smudges into public life and by doing so it also questions the sense of public/private space’, argues David Teh.

For artists who are using performance art to express often controversial ideas that are political, social or religious, Southeast Asia is still very problematic in terms of freedom of expression. According to artist Mideo M Cruz, working in small communities or in the community of origin is not as difficult as in big cities. Personal networks are still very important for performance artists both locally and internationally.

Can censorship can be constructive? According to Singaporean artist Kai Lam, self-censorship is very much part of the artist’s practice in the region. At the same time, for a number of artists, censorship faced in their own country often makes them more visible abroad. In Singapore, following a 10-years ban on performances from 1993 to 2003, several Singaporean artists have been working abroad and as a result have received a lot of attention internationally (Amanda Heng, Jason Lim and filmmaker Tan Pin Pin among others).

Laotian female artist Ole’ Viravong Scovill shared her concerns in seeing how performance art is received with no interest by the public and at times also with suspicion, especially if it touches upon traditions and superstitions that are rooted in the culture of the country.

Artists and curators reflected also on the active role of audiences in the performance. ‘Are we making art for the public, of the public? Or are we just doing our own rituals?’ questions Chumpon Apisuk. For some artists, audiences are intrinsically part of the performative act.  Questions were also raised about how the importance of the original context in which a work is presented and what changes when the performance is removed from this original context and performed in a non-antagonist space.

Indonesian artist Arahmaiani introduced her personal experience with audiences. In rural communities of central Java, the model she follows is independent and grass root: rural communities accept performance art as part of their language so there are not only artists performing but the communities do too.

Many artists such as Richard Streittmatter Tran mentioned the importance of networks such as Asiatopia that provide an open platform for artists to meet, exchange ideas, find advice, discuss issues related to their work. For him, coming from the visual arts, the exploration of performance started through the Asiatopia network.

The controversial nature of performance art requires artists to really support each other in case of need. It is a very close community but ‘there is still room for more solidarity between artists’, says Kai Lam.

Asiatopia 2016 was the second conference on performance art set up along the Performance art Festival (the first was back in 2005). It provided artists and curators with a much needed open space for discussions and sharing. It also showed the importance of networks among artists in the region. Hopefully it will be organised again on a regular base in the future, perhaps in some other country of Southeast Asia next time.

The Asia-Europe Foundation (ASEF) and Arts Network Asia (ANA) were among the supporters of Asiatopia 2016 Performance Art Conference. The project was selected from pool of 75 proposals submitted in 2015 through the Creative Encounters programme.

Bangkok | Art and the Collective in Southeast Asia | exhibition