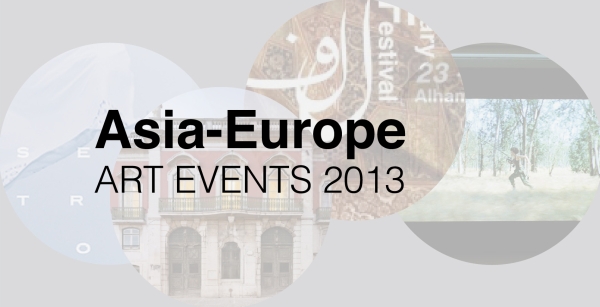 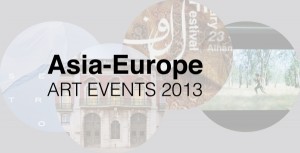 Here is the annual round up of some of the best visual, literary and other arts events in Asia and Europe in 2013 from culture360.org’s Editor Judith Staines.

The passion for the written word and literary festivals is big news in Asia in 2013 as Bangkok becomes the UNESCO designated World Book Capital City 2013. The opening ceremony is in April with many reading and education events planned in Thailand. Literary festivals have been in the spotlight at the start of 2013 with Asia-Pacific’s largest literary festival in India – the DSC Jaipur Literature Festival and Myanmar’s first ever international litfest – the Irrawaddy Literature Festival.  Both events are now over but it is well worth checking the video documentation of the Jaipur sessions for your favourite authors and watch out for next year’s festival in Yangon which looks set to be even bigger and better.  Lahore Literary Festival (February 23-24) is another new event on the South Asian literary scene in the culture capital of Pakistan.

In China, several major literature festivals are organised by independent promoters. The Shanghai International Literature Festival (March 1-17) with 71 writers from 21 countries and its sister Capital Literary Festival in Beijing are programmes of the M restaurant group. The large-scale literary festival organised by Bookworm bookshops, Bookworm International Literary Festival (March 8-22), is a unique celebration of literature and ideas in China, programming 200 events across China, connecting over 90 Chinese and international writers and thinkers. It centres on Beijing, with sister festivals in Chengdu and Suzhou and a caravan festival reaching other Chinese cities.

In London, the Asia House Festival of Asian Literature (May 7-22) features writing about Asia and Asians. Sydney Writers' Festival (May 20-26) is Australia’s largest annual literary celebration.  In June in Malaysia the inaugural edition of #Word: The Cooler Lumpur Festival is the country’s first celebration of the written word. #Word will also play host to the Southeast Asian segment of the Edinburgh World Writers’ Conference, a series of events held at major festivals and book events around the world from 2012-2013, debating key themes on literature and its relationship to contemporary life.

Fast forward to autumn 2013 and you can catch the 2013 Ubud Writers and Readers Festival (October 11-15) in Bali, which celebrates its 10year anniversary and cements its reputation as one of the ‘older generation’ of Asian literary festivals. More opportunities to meet writers and readers are found at the Hong Kong International Literature Festival (November 1-11) and the Singapore Writers Festival (Nov 2-11).

It is an Art Biennale year in Venice, where the 55th International Art Exhibition takes place from June 1 – November 24 and is curated by Massimiliano Gioni. ‘The Encyclopaedic Palace’ has been announced as the theme, inspired by an imaginary museum that was meant to house all worldly knowledge, bringing together the greatest discoveries of the human race.

In New Zealand you can also see the 5th Auckland Triennial (10 May – 11 August). Led by renowned curator Hou Hanru, If you were to live here... includes work by more than 35 New Zealand and international artists, collectives and architects. Over in Australia, on the theme of ‘Electronic Art – Resistance is Futile’, the ISEA2013 international festival of electronic art and ideas comes to Sydney from 7-16 June. The 19th International Symposium on Electronic Art is an annual event that moves around the world.   Another important new media event this year is the WRO Media Art Biennale in Poland. Marking the 50th anniversary of electronic art, the 15th WRO 2013 is on the theme of ‘Pioneering Values’, looking at  the artistic and cultural values that have emerged – and are still emerging – from new media art.

There are some major contemporary arts events in Japan this year.  Setouchi Triennale 2013 was a resounding success in its first 2010 edition and in 2013 the programme is organised in three seasons to enable the public to enjoy the different seasons of the beautiful islands of the Seto Inland Sea where the artworks are sited (3 sessions: between March and November).  In Nagoya, the 2nd Aichi Triennale (August 10 - 27 October) is on the theme of ‘Awakening – Where Are We Standing? – Earth, Memory and Resurrection’ and brings together cutting-edge art and performance from Japan and elsewhere. One of the Triennale’s unique features is that it welcomes both contemporary art and stage performances and there is an impressive list of selected artists. Also in 2013, the Kobe Biennale (1 October – 1 December) - ‘Encounters with Art in the Port’ - features its popular programme of art in shipping containers, alongside other exhibitions and events on multiple sites across the city.

In Norway, the 7th Momentum Biennial (22 June – 29 September) opens in Moss in Southern Norway and is recognised as the Nordic Biennial for Contemporary Art. Nearby, Sweden’s largest art biennale, the Göteborg International Biennial for Contemporary Art has a diverse curatorial team and presents the exhibition on the theme of ‘PLAY! Recapturing the Radical Imagination’ from 7 September – 17 November. Another distinctive approach is taken in the Nordic region in 2013 by the Bergen Assembly triennale - an Initiative for Art and Research (August 31 – October 27). Here, the focus involves a constructive criticism of the roles of curator and advisory board. With no curator in the traditional sense, Bergen Assembly has invited two conveners for its first edition who will establish an assembly with a research-based methodology, with art as a basis and with art as a result. Let’s keep an eye on the results!

SCAPE Public Art in Christchurch is New Zealand’s only international biennial dedicated to the exhibition of contemporary art in public space. Sadly deferred in 2011 due to the earthquake damage in the city, the SCAPE 7 Public Art Christchurch Biennial will run from September 20-November 2 2013. It includes the creation of a permanent public art walkway which will feature twelve new temporary artworks and include artworks from previous SCAPE Biennial events.

In France, the eagerly awaited, often controversial, Lyon Biennale (12 September – 5 January 2014) considers our world of stories and proposes an exploration of contemporary international narrative art, under the direction of the internationally renowned Icelandic curator Gunnar B. Kvaran. In Russia the 5th Moscow Biennale of Contemporary Art (20 September – 20 October) has appointed Catherine de Zegher, Artistic Co-Director of the 2012 Biennale of Sydney, as curator.  In Portugal, the Lisbon Architecture Triennale (12 September – 15 December) is titled ‘Close, Closer’ and presents exhibitions and public programmes to challenge and question the role of the architect in contemporary society.

With a radical – some say crazy – curatorial model of 27 co-curators, the Singapore Art Biennale is titled If The World Changed and takes place 26 October - 16 February 2014. It considers the speed of transformation in Southeast Asia and invites artists to respond to and reconsider the worlds we live in, and the worlds we want to live in.  Also in Asia, at the end of 2013, the Biennale Jogja opens in Indonesia on November 16 until January 6 2014. In China the 5th Urbanism\Architecture Bi-City Biennale*Shenzhen (UABB*Shenzhen) takes the theme of URBAN BORDER, working under two curatorial teams – one Dutch-led and one Chinese-led.  UABB*Shenzhen will open in Shekou, Shenzhen at the end of 2013.

Finally, europalia.india (4 October – 26 January 2014) takes the Europalia international arts festival for 2013/14 back to Asia with a rich and diverse programme of Indian cultural events in Belgium, centred on Brussels.

2013 sees several cultural festivals organised around the 40th diplomatic relations anniversary with Vietnam. The Finland-Vietnam 40th anniversary programme takes place throughout the year. The France-Vietnam Year is in two phases: a French cultural season Année France-Vietnam is organised in Vietnam from April-December 2013 and the Vietnamese culture season comes to France from January-July 2014.

In Europe, the European Capital of Culture is held by Marseille-Provence in France and Košice in Slovakia, each running distinctive year-round programmes.  In Marseille, the new MUCEM museum of civilisations from Europe and the Mediterranean opens in spring 2013.

The creative and cultural industries (CCIs) are an important policy focus in Asia and Europe with an expanding calendar of promotional events. One of the leading fairs is the 9th International Cultural Industries Fair (ICIF) taking place in Shenzhen, China 17-20 May. A strong representation of cultural and creative entrepreneurs from Europe is anticipated in Shenzhen.

So, what are you waiting for?  If you can get to any of these wonderful arts events in Asia and Europe, lucky you!  If you can’t make it, many of the programmes have online access, podcasts and video archives so you can feel like you were almost there… 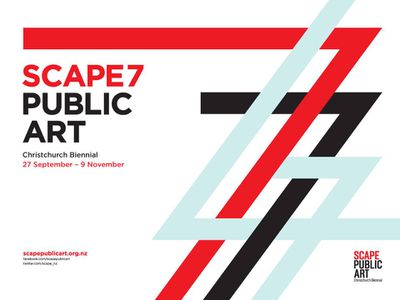